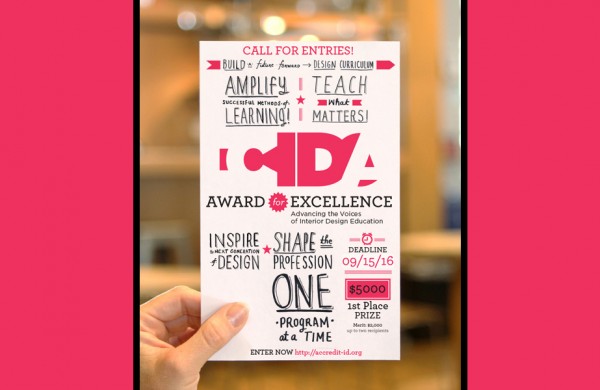 Competitions, Education 6 years ago No Comments

The Council for Interior Design Accreditation (CIDA) is excited to announce the 2016 CIDA Award for Excellence Competition. The CIDA Board of Directors aims to recognize outstanding practices in interior design education.

The CIDA Board of Directors believes that recognizing excellence in interior design education is an important activity that supports the advancement of educational quality. CIDA’s goal with the award is to join the range of efforts underway throughout higher education and the professional organizations to collect and share information about successful methodology and approaches to interior design education.

The Award for Excellence competition is open to faculty members and collaborating teams at CIDA-accredited interior design programs. Judges will give preference to entries that exhibit one or more of the following: clarity of intent and outcomes, relevance to contemporary practices or issues impacting interior design, creativity and/or innovation, and demonstration of successful student learning.

2016 Award for Excellence submissions are due in the CIDA office no later than September 15, 2016. Award winners will be notified in January 2017.