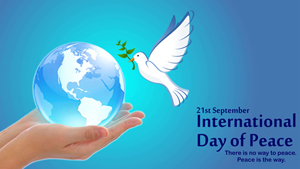 Each year the International Day of Peace is observed around the world on 21 September. The United National General Assembly has declared this as a day devoted to strengthening the ideals of peace, both within and among all nations and peoples.

The 17 Sustainable Development Goals were unanimously adopted by the 193 Member States of the United Nations at an historic summit of the world’s leaders in New York in September 2015. The new ambitious 2030 agenda calls on countries to begin efforts to achieve these goals over the next 15 years. It aims to end poverty, protect the planet, and ensure prosperity for all.