As much as this sounds like a piece of debris hurdling through outer space, it most certainly is not. More terrestrial in nature, this term can mean at least two different things in the design world.

First, in an ornamental sense, it is an architectural element: a narrow, convex half-round bead-type molding that can appear on the top or base of columns or as a framing device on interior panels, exterior walls, cabinetry, and pieces of furniture. To get picky, the profile should be comprised of a half round surface flanked by two flat planes, which are known as fillets. Sometimes an astragal is referred to as a miniature torus, but most people will think you’re talking about a Ford Taurus automobile if you use this latter term, so just don’t.

The second meaning of astragal tends to be the more common one: a vertical strip on the edge of a door that projects, acting as a seal – primarily on double doors. Astragals also appear on shutters to block light and/or provide privacy, but they are usually integrated into the construction of the shutter and match the woodwork’s finish. On doors, especially commercial and more industrial in nature, the astragal is added on later and may be made of an entirely different material – e.g. metal, wood, polymer, etc. – than the door it is serving. These are referred to as “T-astragals” as they are in the shape of the letter T. T-astragals are more heavy duty and provide an effective weather seal, extra security, and, occasionally, acoustical properties since they seal off the air gaps that create sounds leaks. On a pair of double doors, when both doors are active, a separate stile or astragal for each door is needed for maximum effectiveness; however, when only one door is active in the pair, only an astragal is required for the active door.

We just like any excuse to say the word astragal. 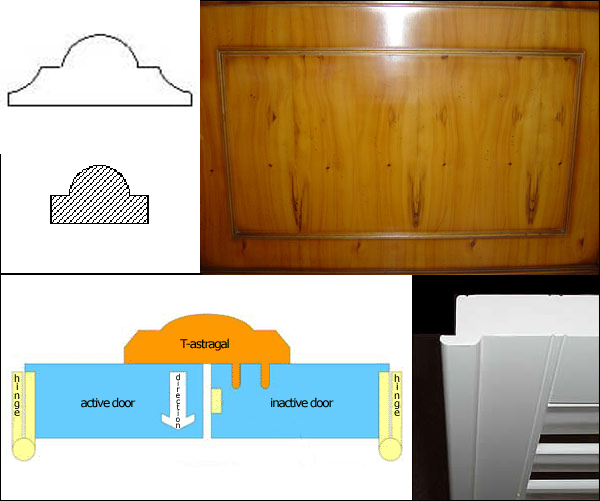