Just as there are many types of Spaniels, there are many types of spandrels. Before we go any further, we want to mention that a alternative, though lesser used, spelling is “spandril.” The general idea to remember is that the term relates mostly to a space bounded by other architectural elements. First off, a spandrel is the triangular area between the side of an arch and the rectangular molding surrounding it above and to the side. It is also the larger triangular area between the adjacent sides of two arches and the rectangular molding above. Thirdly, in a two+ story building, the term can also be used to describe the space between the top of the window in one story and the sill of the window in the story above. In older buildings, many times there are sculpted panel spandrels having ornamental elements or figures. In more modern buildings, this space might be filled with opaque or translucent glass – i.e., spandrel glass. Next, it is also considered the space between the arch of bridge and the upper deck. Before technological advances in reinforced concrete made it possible to have open spandrels, these spaces were filled in with stone. Lastly (and not pictured), a spandrel can also be 3-D. When a dome sits upon a rectilinear base and is raised above the level of the supporting pillars, three-dimensional concave spandrels – also called pendentives – distribute the weight of the dome onto the supports. 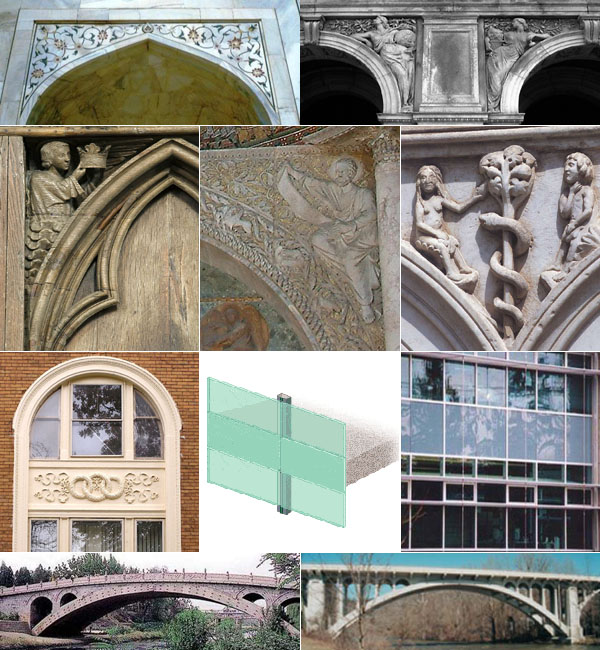