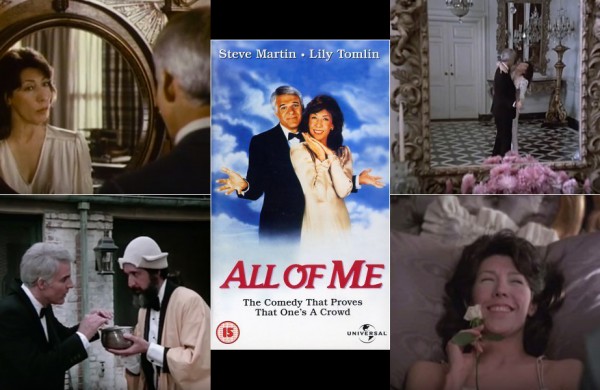 What Makes Me Happy: All of Me

The 1984 movie All of Me is one of my all time favorite comedies. Directed by industry icon Carl Reiner, the film stars Lily Tomlin as unlikable, dying heiress Edwina Cutwater, who seeks to extend her life by transferring her soul into a new body. Hilarity ensues when that body accidentally turns out to be that of Steve Martin, her irritated lawyer who unhappily finds her soul inhabiting his body while he is still in it.

Why All of Me

First off, I’ve been in love with Steve Martin since I was 5-years-old and saw him on television performing stand-up with a fake arrow through his head and acting as a “wild and crazy guy!” in Saturday Night Live sketches with Dan Aykroyd. So there’s that.

Next, joining the two comedy standouts is character actor Richard Libertini, who steals every scene he’s in as Cutwater’s spiritual advisor and soul transferer Prahka Lasa. Just watch the famous “back in bowl” scene HERE to get a taste of his genius.

The icing on the cake: the movie’s soundtrack is fantastic. The “All of Me” title comes from the classic song that’s been recorded by everyone from legends like Billie Holiday and Frank Sinatra to more modern crooners like Michael Bublé and Willie Nelson. Plus, Martin’s lawyer is a frustrated jazz musician, so there are even more opportunities to weave in some wonderful jazz favorites.

For a buoyant rendition of the titular jazz standard, you absolutely must watch the ending credits HERE, where the co-stars dance to it in an ode to silliness, physical comedy and happiness. (Bonus: It even features Libertini.)

Watch the trailer below. If you haven’t seen the movie, I hope you’ll want to now.

<< What Makes Me Happy: Koi Ponds