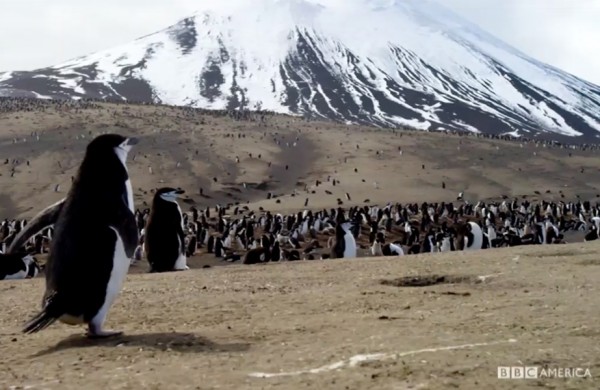 What Makes Me Happy: Planet Earth

Though our home – planet Earth – does make me happy, Planet Earth, the visually stunning natural history television series, arguably makes me even happier, which is why I am absolutely over the moon that Planet Earth II debuts in the USA on BBC America tomorrow night. I cannot wait to witness how the intrepid, relentless filmmakers have added to their already groundbreaking footage.

I am actually a tiny bit jealous of those who have never seen the original 2006 series. They have 11 more episodes full of mesmerizing insights into our unbelievably diverse world to delight, shock, and amaze them for the very first time. Rest assured, however, each episode is worth repeated viewings, and I admit that I’ve watched a few of them at least three times.

The immense care taken to capture these countless high definition moments of extreme close-ups, sweeping overheads, and never-before-seen locations and inter-species interactions is truly mind-blowing, and the financial and time commitments are just as eye-opening.

The original series took five years to produce, and it was reportedly the most expensive nature documentary series ever commissioned by the BBC. According to the network, the follow-up series was “over three years in the making, in 40 different countries, on 117 filming trips and a total of 2089 shooting days.”

The incomparable Sir David Attenborough again provides the mellifluous narration for the new episodes, and his calming voice adds even more gravitas to what we witness: an official record our planet and its inhabitants, some of which might not exist in the next hundred years.

<< What Makes Me Happy: Brazilian Jazz

>> What Makes Me Happy: Popcorn