Miscellanea 14 years ago No Comments

EDITOR’S NOTE: If anyone can track the rich history of ornamentation across the globe, it’s Australian Maurice Robertson. Though his commercial experience now spans a period of 40 years, he still recalls picking up teacups from an early age,

looking for the mark on their bases to discern their makers. His vast career includes years as an international specialist dealer, a valuer to the Australian Commonwealth Government’s Incentive to the Arts Scheme, lecturer, contributor, and consultant to Melbourne’s National Gallery of Victoria, one of Australia’s leading art museums. His current company’s collection includes English, French, Chinese and Japanese porcelain, pottery, bronze, glass, cinnabar, and more. In this installment of OLD SCHOOL, he shines “a new light on an old subject” for us: antique table lamps.

I am passionate about antique table lamps. Not only do they provide needed task lighting for our day-to-day lives, but these historic works of decorative art also provide a tangible connection to our past. Their soft illumination accentuates and compliments the décor and “feeling” of a space while providing those present continual visual enjoyment. Clearly, a lamp is not always just a lamp. Case in point: the following amazing finds. 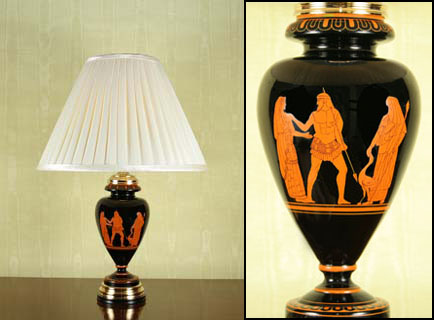 Bohemia, part of the vast Hapsburg Empire, had a long tradition of glass making with important examples being made in the 15th century. After the dissolution of Czechoslovakia in 1993, Bohemia became part of the new Czech Republic. One of the leading glassmakers of the early 19th century classical revival in Bohemia was Count Von Buquoy, who, in 1817, successfully produced an opaque black glass that resembled Josiah Wedgwood’s black basalt stoneware.

You can see that the glass is finely decorated in burnt orange enamel with Greek classical figures, a decorative subject inspired by early Greek/Attic terracotta vases, circa 500 B.C. The Attic vases were fired with a black ground with figures reserved in the terracotta of the body. Here the figure subject is The Greek hero, Hector, Prince of Troy, bidding farewell to Andromache in the presence of the goddess Athena before his battle with Ajax. The lamp rests upon a turned and gilded stepped bronze and black enameled base. For reference, the overall height, including the shade is 20.5 inches (52 cm). 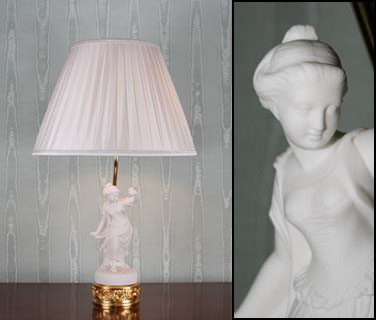 I must admit that Parian porcelain has always been a great favorite of mine for many years, with its ever fresh, white, rather sculptured style. In the 19th century, Parian was in fact known as "statuary porcelain," but technically speaking, Parian is an unglazed or biscuit porcelain first introduced by the English firm of Copeland at Stoke-on-Trent in 1846. Parian became popular and was soon produced by other English and American manufacturers. These figures were produced by being cast molded and the modeling finalized by hand prior to firing.

The subject of our pictured lamp is a very pretty Parian figure of a charming young girl modeled as skipping bare-footed through a spring meadow. Circa 1860, the theme is emblematic of spring and mounted as a table lamp. Her long skirt billows out behind her as she holds the corner of her short jacket in one hand and a spring flower in the other. This delicate figure rests on a turned drum shaped wooden, water gilded stand with a circlet of flowering acanthus. For reference, the overall height, including the shade is 24 inches (61 cm).

Imari porcelain is the name understood in the West as Japanese porcelain made at Arita and exported through the port of Imari. From the mid 17th century, the Dutch East India Company monopolized the lucrative export trade, supplying the insatiable European demand for porcelain.

It came to the attention of the Chinese porcelain makers at the vast Imperial kilns at Jingdezhen that Japanese Imari porcelain was in high demand in Europe.

I am pleased to be pictured here with the circa 1750 Chinese-Imari lamp that we added to our collection. The rare piece is mid-18th century baluster-shaped vase and domed cover. The table lamp is very finely decorated in the traditional palette of Imari enamels: iron red with an under glaze cobalt blue and touches of pale salmon, a typical color range of the period. The decorative subject is that of oriental flowers featuring a large central peony, and the lamp perches atop a finely turned maple wood stand, which is water gilded to a satin finish. For reference, the overall height, including the shade is 23 inches (59 cm).