Connecting The Lines Throughout The History Of Design

Miscellanea 10 years ago No Comments

Or would that same person have imagined that, sometime in the 15th Century, a cabinetmaker in Italy might take a moment to sit back and consider the quality of his workmanship on the vertically fluted pilasters of finely carved mahogany adorning the façade of a china cabinet sitting near his workbench” Can these past acts be connected to an interior designer sitting at a computer sometime later today organizing a pattern of digitally produced lines in AutoCAD – lines meant to represent some interior detail in wood or stone” What is it that compels people to carry various ideas and designs from one century to the next – adapting and re-establishing these patterns through time – and carrying them back, time and time again, into the built environment” 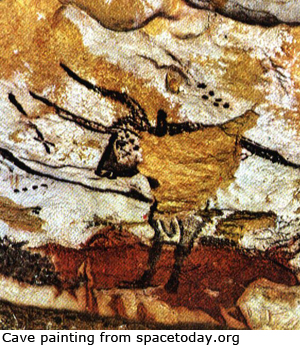 The point in time when people began to design things with an intention or purpose is not clear. If we had a specific date or a possible century that holds the necessary clues, it might then be possible to pinpoint the beginning of design history. As it is, we might be willing to say that, once life evolved from hunting and gathering, people had more time to devote to embellishing surfaces simply for the joy of doing so.

If accurate, this hypothesis does little to explain the powerfully dynamic cave drawings that were painted in flickering firelight 17,000 or more years ago in Western Europe in the countries we now know as Spain and France. Anthropologists and art historians would argue that these paintings – often found in the deepest recesses of the earth – are best explained as a reflection of the intellectual beliefs and spiritual life of our distant ancestors.

We will never know – there are no written explanations or instructions for use. Nothing more than a series of lines on stone in deep yellow ochres, rich subtle red oxides and smoldering lamp black, anyone looking at these paintings today remains mesmerized in an attempt to read the messages they contain.

The Chair As A Societal Mirror 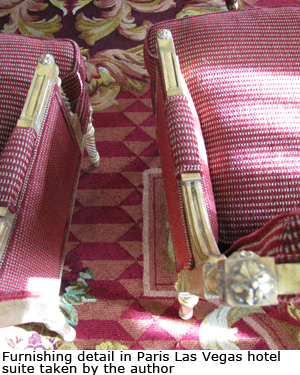 It goes without saying that, as time has unfolded along the millennia, so has invention and creativity. Although much more sophisticated than the work of the early cave painters, the furniture, wall coverings, and other designed objects that we associate with the interior environment of today illustrates and records a wide range of information regarding our present social and cultural preferences. Like the buildings that we place them in, these objects provide a very intimate, personalized record of the people we are and what it is we collectively treasure as the clock strikes and the calendar page is turned.

The fully adjustable chairs that we seek out for use in our offices and homes, for example, are a reflection of the people we are at this point in time. Unlike the rigid wing-backed chairs popular in the 17th and 18th Centuries – when sitting upright equated to dignity and decorum (and the assurance that one’s powdered wig stayed upright and level) – the multi-position chair popular in our present century defines us as we are now – people who look to furniture to accommodate a wide range of body positions designed to meet the requirements associated with personal comfort.

Whether upholstered in a colorful modern print or a reproduction textile pattern reminiscent of the French Directoire period, our desire for accommodation and relaxation as we assume a sitting position is an indication of our particular place in design history. As they look back to the 21st Century a thousand years from now, it is intriguing to consider what the people who will be creating design history of the future might think about our current choices in furniture, color and interior detailing.

Back To The Future 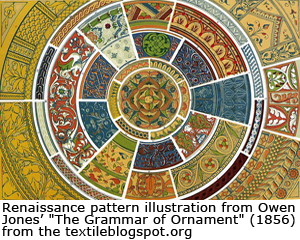 It’s especially intriguing to consider what particular ideas or beliefs deeply entrenched in history will be carried along in time to inform the design decisions of the future. If we entertain the possibility that the people of the future may be sitting in air-powered vehicles hovering silently over a network of magnetic “roadways,” it might be even more interesting to imagine the seats of these vehicles upholstered in a nano-textile based upon a Renaissance-inspired design made up of a familiar pattern of lines and dots.

Given what we know about design history, it isn’t at all odd to assume that a textile design developed from the details of the interior environments of a civilization of people living in the 15th Century will be carried into the distant future. The Renaissance was the age of rebirth – the coming of ages of new ideas and a time when old ideas were re-inspired into new thoughts…the era of Leonardo da Vinci, designer of flying machines, armored cars and submarines. Beginning as a simple pattern of lines on a drawing board in 1485, Da Vinci’s armored car may have seemed outlandish and impossible to anyone living in Western Europe during the 13th Century. Today the idea and reality of an armored car is part of our cultural definition. 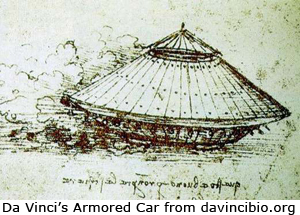 History clearly informs our design choices as efficiently as it reflects our decisions. With this in mind, it’s delightful – and not too outlandish to assume – that, on the futuristic “dash board” of our air-powered vehicle, there will be a variation on a pattern of vertical lines – not unlike the pattern of lines etched in the soft rich surface of the earth tens of thousands of years earlier.

If you would like to experience, first hand, the imagination and exhilaration of design history as reflected in the work of the most notable artisans, architects, textile designers and craftsmen of the Italian Renaissance, consider joining me, Dr. Homme, on an interior design travel adventure to Italy!

CLICK HERE to download a PDF of this year’s travel itinerary for the International Interior Design Study Tour 2011, which encompasses The Great Houses of Europe: The Treasures of Italy, taking place May 14-22, 2011. You won’t want to miss it!