Singing The Blues In Paris

Miscellanea 9 years ago No Comments

According to the author Michael Pastoureau “color is first and foremost a social phenomenon”. [1] Until the end of the 12th Century, blue was a virtually unknown color with no social, cultural or religious significance. Unlike the deeply symbolic hues smoky black, red umber and creamy white – rich, earthy colors used in the earliest cave paintings and woven deeply into ancient color traditions from the farthest mists of time and into the late Middle Ages – blue played absolutely no part in communicating ideas or in evoking any particular aesthetic or cultural response. Like green and yellow, blue was present in the experience of daily life and, although it was used frequently, its visual qualities were typically associated with textiles, clothing and dyestuffs rather than with any symbolic subject or object. In polite conversation, blue had modest if any value. For the most part the color blue was a socially and culturally invisible hue given far less importance than green – a color often associated with death in the Middle Ages.

The complete lack of association of blue with some social, cultural or religious significance continued well into the latter part of the twelfth century when the color finally made its way into the experience of religious spaces. As an element in mosaics, paintings and stained glass windows, blue began to play an increasingly more substantial and significant role.

Prior to the 12th Century, thoughts about color as an entity associated with religious experience drew sharp criticism from some and considerable support from others. During the 9th Century and continuing well in to the 12th Century and beyond, many theologians argued that color was a dense material with form and weight and, as an aspect of the physical world, it’s role was to cover objects in order to give them a specific description or visual quality.

Highly critical of this point of view, scientists of the time believed that color was light and, due to this special quality, it belonged in a place of worship. As a transparent yet visible entity, light coming through blue glass into the interior of a cathedral was, in their opinion, nothing less than an association between earthly experiences and the realm of the divine. From the scientific point of view, blue light illuminating a sacred place of worship equated to a direct and divine connection between earth and heaven and, ultimately, with God. 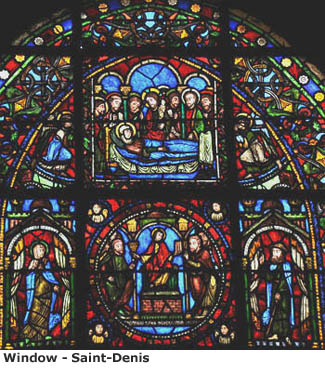 Amidst all this speculation and fervent discussion, this debate – which began in the 9th Century and continued over the next four hundred years – hinged on the realization that the church’s final word on the use of color – and especially blue – would significantly impact how people worshiped, how they lived their lives and how they would approach the creation of any subsequent works of art.

Unlike many of his religious contemporaries and one of the most notable religious supporters of the theory that color is light and therefore divine, was the French abbot, Abbot Suger. During the middle of the 12th Century, Abbot Suger was charged with overseeing the reconstruction of his abbey – the Abbey Church of Saint-Denis – located in the outskirts of Paris.

Feeling that there was nothing more important than color and light to create a sense of splendor in a place of divine worship, Abbot Suger utilized a series of gloriously colored panels of stained glass in a way that transformed the interior of the Abbey Church of Saint-Denis into a mesmerizing space that Pastoreau describes as a veritable "temple of light and color". [3]

Stepping into the cathedral, a 12th Century visitor to the newly renovated Saint-Denis would likely not be any less amazed or inspired by Abbot Suger’s stained glass windows than would a visitor of today. However, if not aware of the history of the color blue up to this point, it might not be as meaningful an experience. 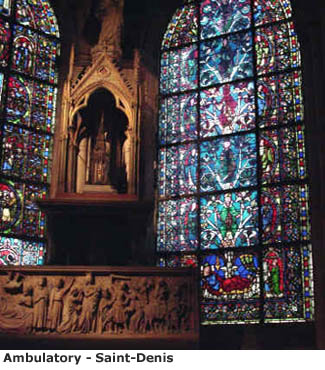 In the colors of the splendid stained glass windows of the Abbey Church of Saint-Denis we realize that this delightful example of Gothic Rayonnet architecture is the place where the history of the color blue changed forever. Here blue is no longer invisible…here it is the visual key to the experience of religious worship. No longer speaking at the quiet almost inaudible whisper it did for hundreds of years prior, blue is singing loudly here. But why shouldn’t it, having found its celestial voice as the newly crowned color of the heavens and all that is divine”


Blue Is The Hue

Centuries later we still associate blue with many aspects of our lives:

Whatever his intentions were, his actions caused an imprecise moment in historical time when people stopped to reconsider blue and began thinking about it in a very different way.

If blue or any of the other colors on the spectrum is a personal interest, please consider joining Dr. Denise Homme’s 2012 Interior Design Study Tour titled The Colors of France: Paris and Provence. The travel dates are May 12- 20, 2012. CLICK HERE to download a PDF of the complete itinerary and information regarding how to apply for a place on the tour. You won’t want to miss it!