Miscellanea 9 years ago No Comments

My fascination and, to a lesser degree, struggle with Fractal Art started in 1982, before there was such a thing as Fractal Art. Benoit Mandelbrot had just published The Fractal Geometry of Nature, and the book contained some wonderful illustrations created by programmers at IBM Research. I was intrigued by illustrations of the set named after the author, the Mandelbrot Set. Writing a computer program to plot the Mandelbrot Set was trivial, but with a G.I. Bill student’s budget, my prints were limited to 4” strips of black & white thermal paper. Even so, I became increasingly curious about the set, because the closer I poked around the more I found. I wanted to understand the significance of what I was seeing.

How was it possible that a simple iterative function could produce an infinite number of mysterious designs” Who was the designer” If there was meaning, what was it” But family and careers in software and photography pushed these questions to the back of my mind for the next 25 years. 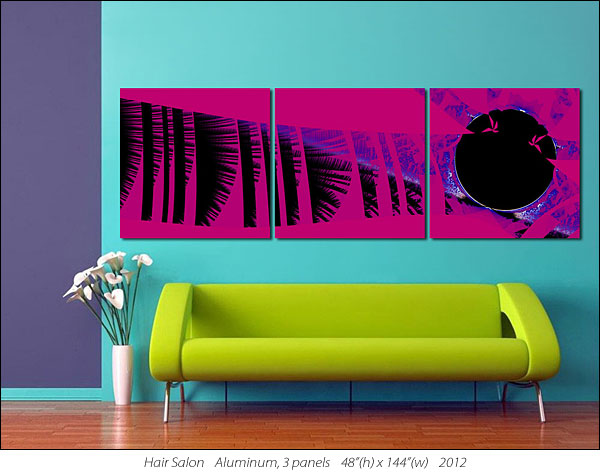 What Fractal Art Is & Is Not

According to Kerry Mitchell in "The Fractal Art Manifesto," Fractal Art is not computerized art, random or lacking in rules, unpredictable, nor something that any person with a computer can do well. Instead, Fractal Art is expressive, creative, and requires input, effort, and intelligence. Bottom line, "Fractal Art is simply that which is created by Fractal Artists: ART."

In 2007, with computing power magnitudes beyond anything from the 80’s, I began afresh to explore the Mandelbrot Set as well as other fractal sets and more complex equations from the young field of mathematics called Chaos Theory. What I found was a virtual universe of shapes, swirls and patterns. Some resembled living things under a microscope and distant galaxies through a telescope; others were purely abstract. Without the former limitations, I could now assign color values to variables such as velocity, acceleration and proximity. With color and amazing computational speed the mathematical universe came to life, and the questions I had back in 1982 popped vividly back into mind.

I began exploring regions never seen by anyone else before and capturing images at resolutions that far exceeded the best digital cameras. Instead of traveling and lugging around cameras, lenses and tripods, I began a new journey to where no man had gone before from the luxury of my home office. 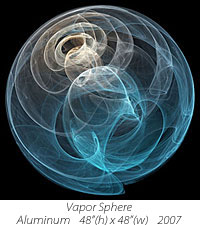 Knowing that it was in its infancy, and seeing that the web was overpopulated with mediocre fractal images, I initially avoided associating myself publically with Fractal Art. But choosing instead to raise the bar and to help bring Fractal Art into maturity and wider acceptance, I applied my skills as a photographer to compose images that were pleasing to the eye and interesting to the mind. For larger images designed for two or more panels, I set rules for myself. For example, the right panel of a diptych had to be structurally different from the left panel, and both panels had to appear to be complete without its partner panel.

Taking the next step, I researched print options and found Image Wizards, an innovative imaging company with an aluminum image infusion product called AluminArte™. (Note: Image Wizards was the first company to put photos on coffee mugs and graphics on mouse pads.) The moment my first aluminum print order arrived and the crate was opened, I knew I had something special.

My wife Sandy and I were astonished as we hung “Vapor Sphere,” our new 48”(h) x 48”(w) glossy aluminum print, in the foyer of our home. Light seemed to radiate from the piece, and close examination brought new details into focus. The piece demanded interpretation, yet it yielded many sub-images, feelings and emotions. To me, it was exciting to behold a new art form and to have participated in its creation. But I knew that I was just a participant, more like a nature photographer than a painter, who had captured something that existed hidden from sight forever until this moment. 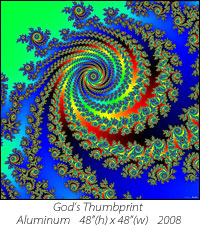 Desperately wanting to see a reaction to the piece by someone else, we called our neighbor Ruth and asked her to come over. Ruth is an historian, speaker and singer, and her Austin stone & brick home is decorated with sculptures and paintings of eagles. When Ruth entered our foyer and saw the piece, she began to point out things in it that neither Sandy nor I had seen. Before 60 seconds had passed Ruth exclaimed, “I’ve got to have me one of these!” So my first client order was placed.

A Leap of Faith

I named my fractal art series “CHAOTICA” after Chaos Theory, the area of mathematics that contends there is order in chaos, and launched it to the public on New Year’s Day, 2009, at Caffe Tazza in Tyler, Texas. While it was a big risk to show fractal art in a small Texas city where longhorn and bluebell paintings are more popular than all the classic painters combined, the patrons examined the work closely and were amazed. A representative for the ETX Wellness Expo happened to drop by for coffee, and she made the decision on the spot to give me featured artist status at the expo.

At the expo I met Dr. Fred Sorrells, an international ambassador for people with disabilities. This not-by-chance meeting began a synergistic relationship that, over the course of the next four years, resulted in exhibits in Dallas, Fort Worth, Arlington, Marble Falls and several other Texas cities.

In every showing, CHAOTICA has elicited strong reactions from a wide variety of people, mostly very positive. For example, a retired Marble Falls couple decided to redecorate their kitchen around “God’s Thumbprint.” They bought the piece after visiting the gallery several times, and gifted it as their wedding anniversary gift to each other. And a young boy in Arlington who, after staring at “The Hope For Many” for several minutes, exclaimed, “I want to do this when I grow up!” This piece was later sold to an art collector in Arlington. 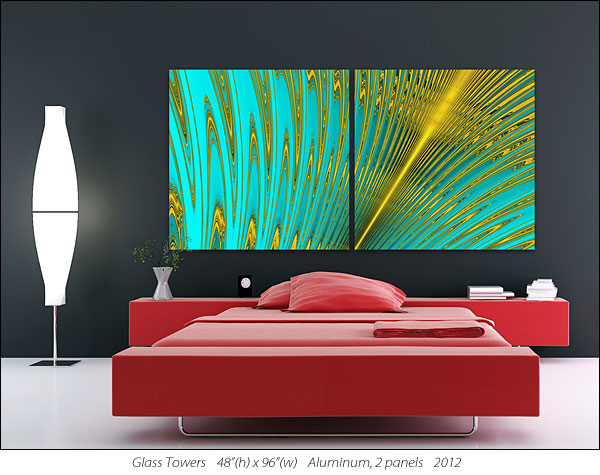 Dr. Sorrells and I have now positioned CHAOTICA to sustain missions for people with disabilities, primarily though professional interior designers and art exhibits nationwide. Missions by the International Institute of SPORT [IIOS] and Operation Go Quickly [OGQ] have already helped disabled people in Haiti, Niger, Kenya and the United States, and missions are planned for South Sudan and other nations where war has disabled multitudes of people.

OGQ provides disaster relief, mobility devices, medical treatment, hearing aids, therapeutic recreation and more through a partnership with churches and organizations that are trained and mobilized to serve people with disabilities. OGQ recently completed a hearing mission to Haiti and provided hearing services and hearing aid fittings for many hearing impaired people.

While supporting missions to help disabled people through CHAOTICA may be unconventional, there’s no doubt that it satisfies one of my three original questions about fractal art, “If there was meaning, what was it”” The meaning, after all, is what I as the fractal artist chose it to mean, and I made the decision that, at this time, CHAOTICA is meant to help the helpless. 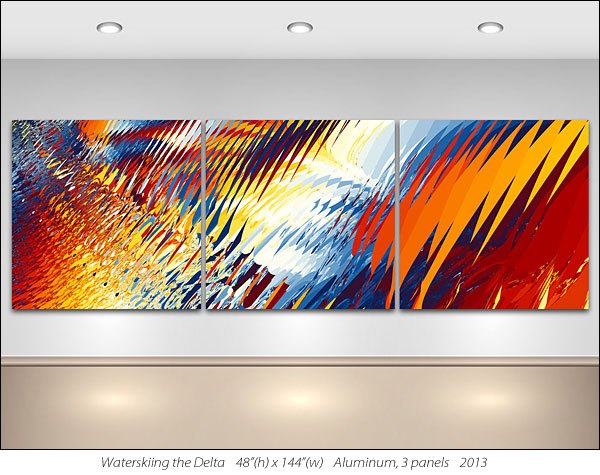 The Designer’s Eye – Raising the Bar

Years after launching CHAOTICA, the compositional aspects of Fractal Art have become even more important to me, and the level of discipline I apply has increased. Before rendering an image for print, I envision it on a wall and contributing to the flow and ambience of a room. I consider what the piece might mean to casual passers by and to employees seeing it every day.

Properly selected and installed by a professional designer, CHAOTICA can stimulate minds and trigger conversations and new ideas. The triptychs and quadriptychs in particular can represent a single idea from various perspectives, or several ideas connected together to form a powerful concept. Designers can build on this notion of creative thinking by extending it throughout a room. 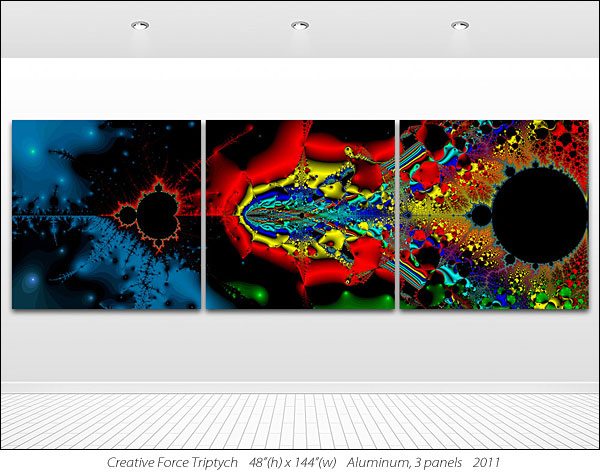 Indeed CHAOTICA can stimulate both critical and creative thinking, and because of this it was selected as the catalyst for the Creative Force Triptych Competitive Scholarship Program at Tyler Junior College in Tyler, Texas. The competition challenges teams of three music students each to compose a piece of music in three parts that describes the CHAOTICA piece “Creative Force Triptych.” The winning team of musicians will perform their composition during a public unveiling ceremony, and they will each receive a $1,000 scholarship. The competition is underway and will conclude towards the end of the Fall 2013 semester.

While now able to watch relatively trivial iterative equations produce new previously unseen complex images in seconds, and even understanding the mathematics fairly well, I still ponder the questions I asked myself back in 1982. If anything has become clear to me, it is that no man can credit himself with authorship of the infinite beauty that exists to be found in mathematics. And with so many similarities to nature that are embedded in the formulas, there may be a deeper significance that is yet to be discovered. 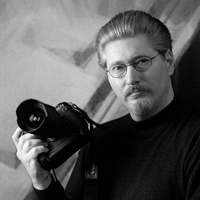 About the Artist
Don Bristow is a photographer and fractal artist living in Bullard, Texas. Bristow’s background also includes 20 years in the software business and five years in the web design business. Today, through his electronic design studio Lightray Photoimagery, Bristow produces CHAOTICA aluminum prints and provides photography and design services for web and print. He has exhibited fine art photography and CHAOTICA at over 30 venues in California and Texas. CHAOTICA will go on permanent display in a gallery owned by Faux Artistry & Designs in Naples, Florida, starting in Fall 2013. Lightray Photoimagery is an ASID Industry Partner.