Places 12 years ago No Comments

P&C readers, you might remember me from a few years ago, when I was the student spotlight in the October 2004 installment of STAR POWER. At that time I lived in Mexico, but since then my husband and I have done a bit of global

trekking, which landed us in the Taiwanese city of Taipei for the past two years. As we now prepare to leave Taiwan for yet another continent, I begin to reflect upon my experiences and personal growth in a foreign land and culture. When I first arrived, my point of view on the Taiwanese design style was, well… let’s say “conservative.” But upon departure, my perspective has completely changed due to a little cultural context.

At first I found myself completely overwhelmed by the over use of vibrant color and opulent detail, as well as the peculiar mix of old and new. These prevalent design practices were a far cry from the cultural design imprint stamped into my brain. Frankly, I think my design sensibilities were simply overloaded. However, my mind eventually opened up once I realized that what I was experiencing was truly Asian and not the Asian-infused design as interpreted by those in the western hemisphere.

In time I began to appreciate the cultural significance of the ornate details and liberal use of red and gold. In context, it began to make sense and allowed for acceptance and, ultimately, appreciation of this new world I was exposed to. Without going into great detail about the popular elements of Asian design, I will explain that red and gold are auspicious colors in Asia. Being a very superstitious culture, this explains quite a lot about what you see and what people are doing.

So I set out to broaden my horizons and to learn and grow from this opportunity. Luckily, while in the country, I had the pleasure of meeting several interior designers, some local and some from other countries practicing in Taiwan. We’ve had some interesting discussions about Feng Shui, and it always boils down to what I call “common sense design” combined with a strong dose of superstition… but that’s a whole other conversation!

In two short years of hunting for interesting objects, I have come to the conclusion that one great find always leads to an educational experience, which always leads to another. This in itself has made the hunt even more interesting because my curiosity always gets the best of me, and I end up researching for all the details I can uncover.

At first, I began searching for traditional Taiwanese furniture. Locals informed me o its very distinct characteristics, some seen nowhere else but in Asia. I quickly learned that finding anything that actually originated in Taiwan is impossible, so my energy was quickly diverted to objects from other parts of Asia. Fortunately, my disappointment was short-lived.

While scouring antique shops, warehouses and back alley stores I found a variety of things, the most exciting being a set of commemorative ancestral portrait paintings from China. I was informed that these have become quite rare in China for two reasons. One, families have been selling them off because they apparently need the money. Secondly, the art itself has completely died out because of the popularity and ready availability of cameras, so these painted portraits are no longer being commissioned. 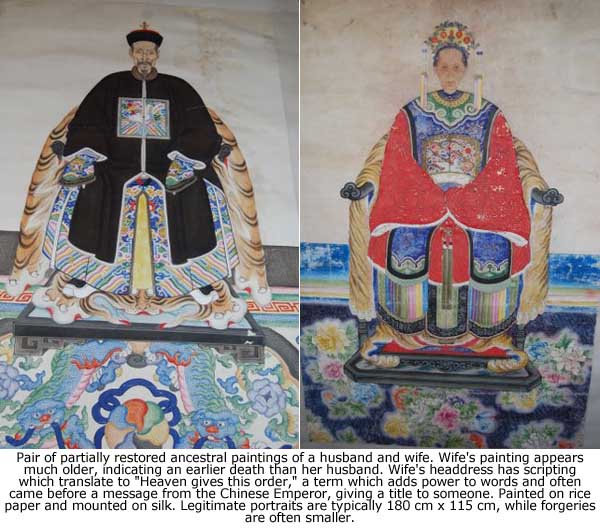 Portrait Of A Culture

By now you are probably asking, “What are commemorative ancestral paintings”” I’m happy to tell you because I find them absolutely fascinating. They are commissioned portraits by family members, sometimes while the person was still living, but often after the person had died. It is believed that one could communicate with the ancestral spirit by hanging his or her portrait and praying, burning incense, and placing food, wine, flowers, etc. on an altar in front of the portrait. Many of these paintings are quite damaged since they were exposed to the elements for decades, so restorations are to be expected.

Paintings complete during various periods contain particular elements. For example, those of the Qing dynasty always have the person faced forward with a solemn expression on the subject’s face. One was usually seated in a chair with a rounded back, which indicated status or honor, and the subject was always draped with patterned silk or tiger skin. The sitter wore a robe (which identified rank) and a hat, and sometimes there was a rug or carpet on the floor.

If the person was of a civil rank, the military or from the Imperial family, then there are significant differences in finished portraits. During this same period, robes indicated rank and had a badge/patch with details that identified one’s status. Listed in the order of importance, symbols for civil ranks included the crane, pheasant, peacock, and goose. For military ranks, level of status began with the lion and then the leopard, tiger, bear, and panther.

Experts can authenticate portraits by clues in each painting, which not only include the symbolic badges mentioned above, but also details in rug patterns and designs. Only the better quality portraits included rugs because of the time and expense in painting them. Rugs were considered a luxury, and their presence enhanced the status of the subject. Rugs were usually painted using a pointillism technique to represent the knots of the rug. 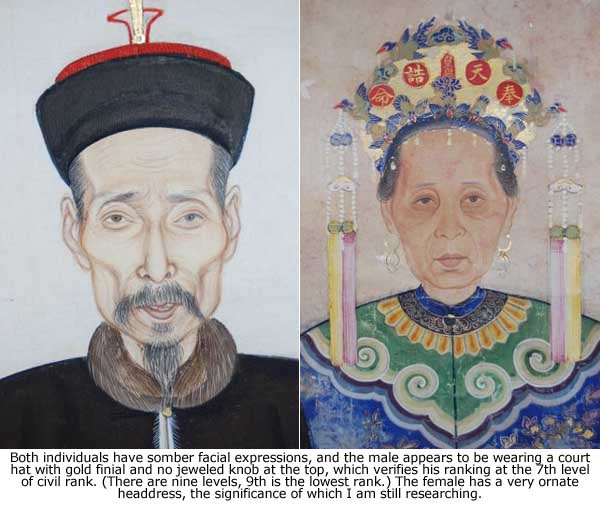 A final important detail about ancestral portraits is that the face was painstaking painted in great detail to ensure that it reflected their ancestor’s image and not someone else. There was tremendous fear that if the painting did not resemble the ancestor, the family’s prayers and offerings might go to the wrong person. Intriguing, isn’t it”

My second interesting discovery was a wooden coin chest found in a dank and dirty store with furniture and things piled in front and on top, making it virtually unnoticeable. Once we cleared the way, I found the sturdy elm chest with the decorative elements of iron plates and studs. The best part was that it was completely finished on all four sides, which I was told was quite unusual.

With mortise and tenon joints, the construction is easy to identify. The wood was almost like rock, confirming its significant age. In the top there sits a small door, which allows access to the inside for the storing of coins and other important items of diminutive size. There seem to be conflicting reports on its origin – either from China or Burma – but it is said to date from the early- to mid-1800s.

These last photos are just fun finds that I thought I would share. Shown are some really cool, round red cloth lanterns with iron fretting, a reproduction Qing Dynasty horse, 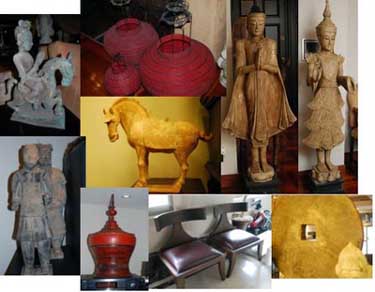 an old bronze statute, terracotta warriors statues, some quirky chairs and life-sized Thai statues and, of course, the typical mounted “wheel” and offering urn. I’m certain to have fun mixing these with all my other treasures from my travels. It’s a good thing that I love eclectic design – as you can imagine, nothing I own matches!

All in all, living in Taiwan has been an eye-opening experience, and it reaffirms my thoughts that we are all students in life, and our life experiences just scratch the surface of the world of design we are yet to discover. I’m happy to report that our next adventure will take us to the South America city of Bogotá, Colombia. I can only wonder what new lessons await me there.