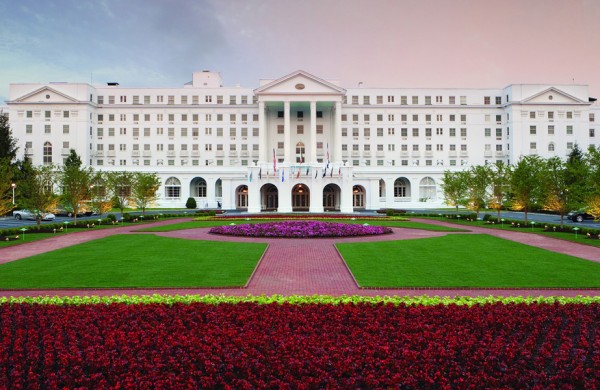 High Style with Dorothy Draper Via Carleton Varney at The Greenbrier

Places 11 years ago No Comments

My weekend at The Greenbrier with Carleton Varney was like walking into one of the homes featured in his 2008 book, Houses in My Heart: Carleton Varney: An International Decorator’s Colorful Journey. The special event that I had the pleasure of attending was the historic property’s “High Style With Dorothy Draper” Weekend just last month, and it was hosted by none other than Mr. Varney himself. I expected history and got some, but the pleasant surprise was experiencing Mr. Varney himself – the au courant and contagiously energetic international designer (or decorator, as he refers to himself). Mr. Varney’s firm currently works on projects around the globe, but they have had a contract with The Greenbrier in one way or another for decades. It’s his house, and he knows every inch of it.

Sure, I heard all about Mrs. Draper, had much of her Greenbrier work pointed out and even saw a couple rare film clips of her and her work with comments by Mr. Varney. She is a legend, and Mr. Varney showed his complete respect. But let’s get something straight – Mr. Varney does “Draper Style,” and it has been Varney’s “Draper Style” for a long, long time. 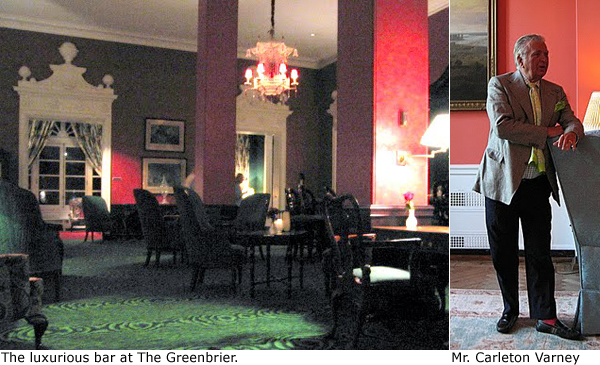 Carleton Varney is one of our great American Designers in his own right. He believes that the Draper influence on today is Classicism. He can do Classicism and much, much more. By spending a weekend at “his house” in his presence and under the new ownership of Jim and Cathy Justice, I realized what had been missing from my previous visits to The Greenbrier (documented on PLiNTH & CHiNTZ – December 2006 / pre-renovation & February 2008 / post renovation). It was the present. Mr. Varney made the place come alive as only someone who fully comprehends how the past connects with the present can do.

I love touring design significant buildings, but history alone does not welcome you like the people who understand that history and live with it in the context of today. Owner Jim Justice is a local. He understands The Greenbrier, its history, its interior design significance, and its connection to all of us. The Justices have been most influential in bringing this relic back to life. They have their offices there, they work there, and they welcome you there.

Make no mistake – The Greenbrier is one of the most wonderful interior design experiences you can have. When you stay there, you are part of it; you get to live in today’s world within a most luxurious historic treasure…

•    San Diego-based Architectural Photographer Brett Drury told me that he remembers his grandmother hosting him and 28 other family members there when he was 19: “It is something you never forget.”
•    The Greenbrier is precisely what the husband of Charlotte, North Carolina-based Interior Designer Traci Zeller’s proclaimed outside the theater during that lovely weekend: “Awesome.”
•    Its allure prevents Flower magazine Editor, Margot Shaw, from ever missing an opportunity to visit: “Inspiring!”
•    Its unique charm is the reason a young family traveled over 1,100 miles from Dallas, Texas: “Special.”
•    And I certainly agree with how my own husband referred to the landmark property: “A place you can get used to.”
•    A lovely lady from Cleveland, whom I met during the Draper Weekend, has known all of these things all along as she has been experiencing The Greenbrier for 22 years!

Yes, one half expects to catch a glimpse of Mrs. Draper, The Duke and Duchess of Windsor, and an American President or two dining under the crystal chandeliers in a darkened corner of the main dining room. But that isn’t all. Expect to enjoy yourself in a multitude of fantastic interior spaces and roam about on the grounds for resort pleasures not known elsewhere. Expect employees and staff – who have worked there for years, mind you – to walk proud and welcome you with open arms. Expect the indelible influence of Carleton Varney.

I liken The Greenbrier experience to the aura one feels when visiting Europe and dining at an outdoor café surrounded by history. Apparently, over the last couple of hundred years others have also felt a similar ambiance when visiting the property’s regal grounds because most can’t wait to go back.

The Greenbrier is a “house” again, albeit a rather large one. There is nothing more exciting in the interior design profession than a spectacular home in which you can actually live your dreams!

I do hope you will stay tuned for more as the Justices gave me a sneak peek of the casino slated for opening in early July 2010. I saw both Dorothy Draper’s and Carleton Varney’s influences in those drawings, but I also saw the future in its Monte Carlo flourishes – executed in The Greenbrier style, of course. Oh, the columns, the blue and white Chinese urns, the richness of the colors, the new Draper Café overlooking it all… 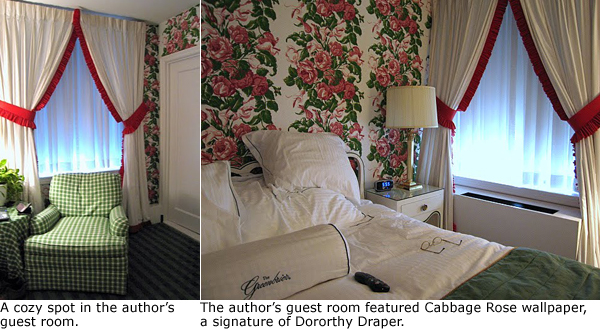 And, yes – I started planning my return to the historic property before I even left it. I very much want to experience that fabulous double curved staircase that I caught a glimpse of in those drawings. That staircase is literally something right out of an old movie that inspired Jim Justice and then became the design vision of Carleton Varney. This new casino, along with what is already an unbelievable historical resort, is truly an inspiration for all.

Isn’t this what we all love about interior design – visualizing the client’s dream, perfecting it, tweaking it, being passionate with the details of it, and then seeing it come to life”