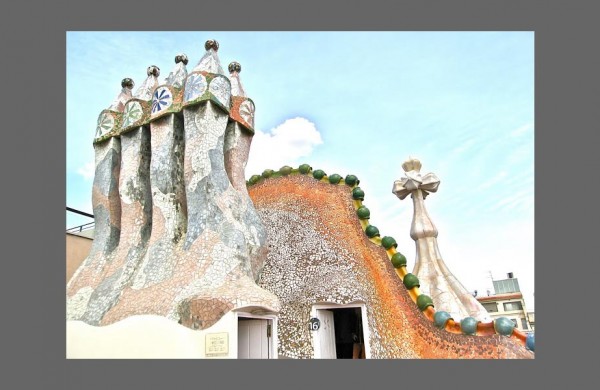 Up Top In Barcelona – Part I: Roof Walking

Places 7 years ago No Comments

Strolling along the tiled – and I mean tiled – rooftops, gazing out over Barcelona, and soaking up the warm sunshine is a pleasure hard to describe. Antoni Gaudí’s curvilinear rooflines infuse the city with pure magic. From below, their angles, twists, nooks and crannies emerge as creatures from dream-inducing fairy tales. From above, they frame the stunningly beautiful, colorful city that welcomes millions of visitors per year. These fanciful roofs pull and push, move and lift you. They elevate your spirit up like a cartoon cathedral and set you back down in a place of make believe and wonder. When on the rooftop, I couldn’t wait to be on the ground exploring Barcelona’s wonderful shops, restaurants and historical sites, but when on the ground, I couldn’t wait to be up top yet again.

Surprisingly, Casa Batlló is a reconfigured building. The original construction took place between 1875 – 1877, and Gaudi’s changes were made between 1904 – 1906. The owner, Joseph Batlló, wanted a spectacular structure that would compete with other Modernista buildings on the same street. Below, you see Casa Batlló from the street corner and then closer, looking up from below.

The stairway just inside Casa Batlló immediately slowed my fast, city-paced approach. I couldn’t help but take a good look around. It was a bit disorienting at first, but then a welcome meandering relaxation took hold. The stairwell was organic with fish like movement. I went up slowly while letting the architecture do its magic and have its way with me. Further up, through a window I viewed up close a skeletal bone-like column sporting leaf forms and could sense a special connection between the historic building and the bustling modern city. Other windows, used for ventilation via an interior airshaft, provided light and art and incredible inspiration. 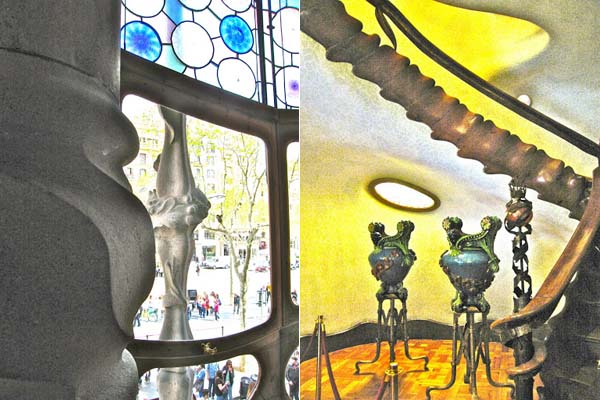 Ah, but the roof was the destination.

When I reached the small open doorway at the very top of the building, I breathed in the Mediterranean air and gazed out at the view beyond. As I stepped onto the famous roof, I turned and swayed with the rhythm of tiled chimneys. There were more chimneys and more tile and curves and ups and downs and fabulous unbelievable roof embellishment. Some tiles were like scales. One part of the roof is said to be a dragon’s back. All of it was fanciful and functional. The chimney designs even prevent back drafts. Who knew roofs could be so absolutely functionally intriguing and why are most much the opposite” 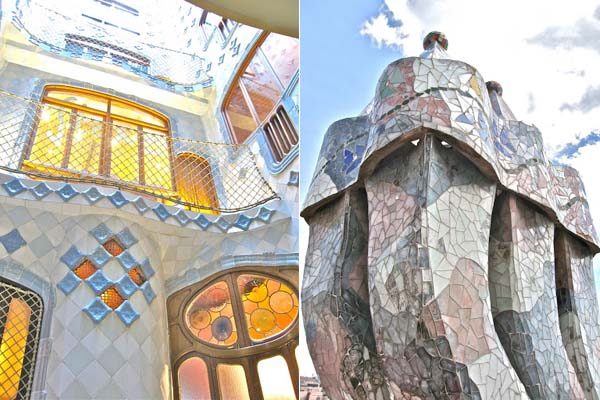 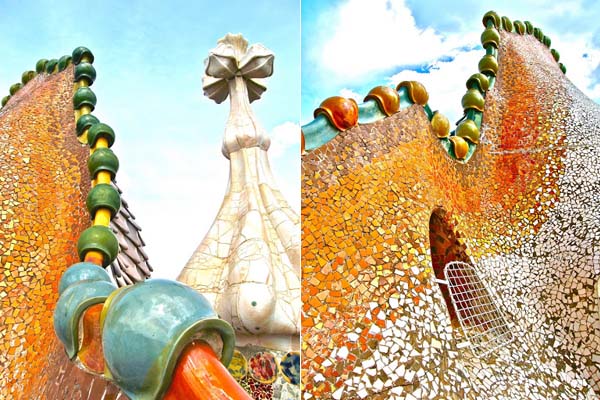 Casa Mila or La Pedrera may not be as brightly colored or have quite the effect of dragon scales as Casa Batlló, but it is no less incredible. Form and line and shape dominate with niches and crevices and walkways and views. Designed by Gaudí and constructed between 1906 – 1912, it is also of the Catalan Modernista Art Nouveau period. The structure was built on two apartment blocks with independent entrances, two inner courtyards, and a common façade.

The building has steel support and curtain walls. According to Wikipedia, the façade is self-supporting with an underground car park and elevators for residents and their servants. The majority of the interior of the building is not open to the public. The public can, however, enjoy jazz performances ‘up top’ in the summer.

The façade, as seen from the street, is undulating with fanciful iron balconies and an extraordinary car entrance.

This roof structure, viewed from inside Casa Mila (photos below), is almost as fascinating as the exterior. It has ribs and spines. However, most of the detail is ‘up top’ and the detail matters. 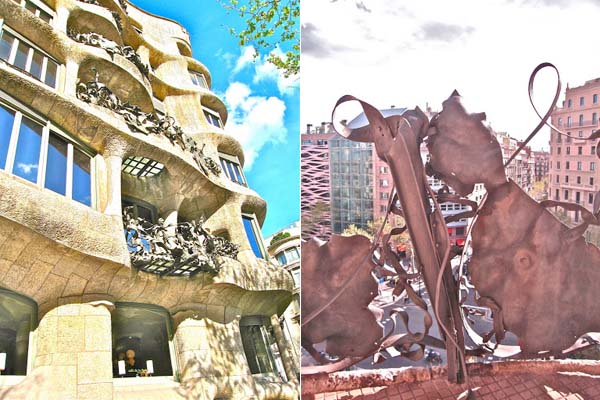 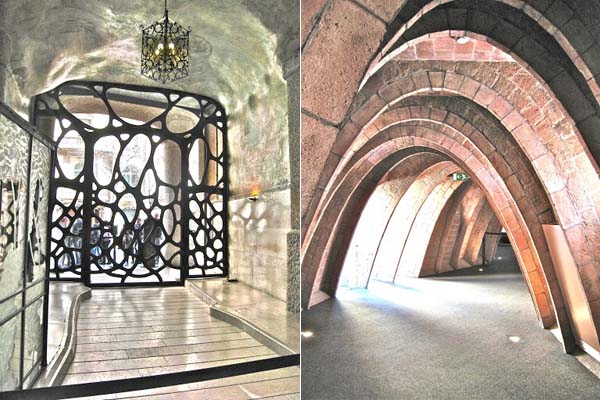 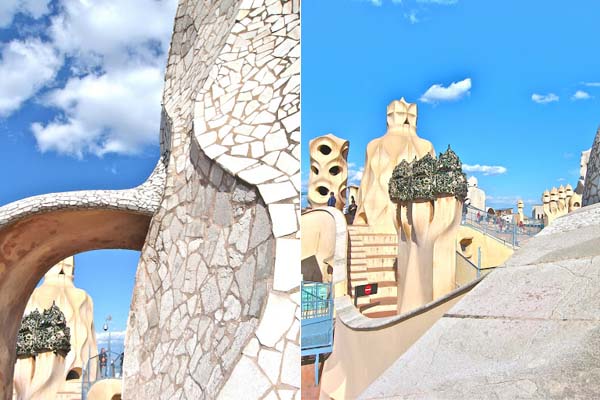 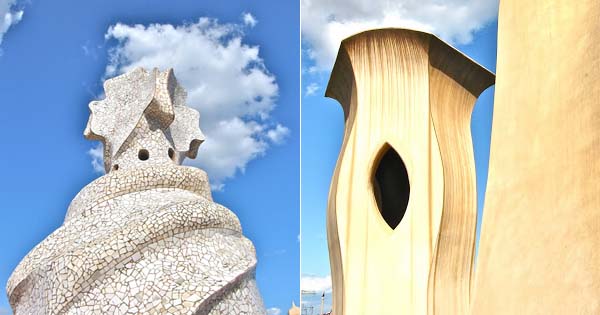 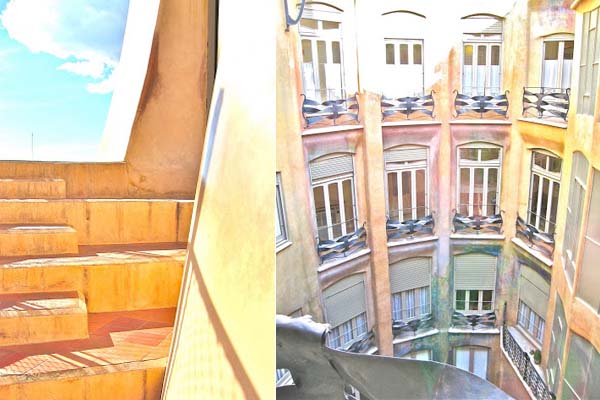 Lesser know Palau Güell (photos shown below) is an earlier Gaudi’s work (1885 – 1890) in which he worked to overcome reference to historical styles and create his own structural forms. It was the basement horse stable, and not the attic, where I found Gaudi mushroom like structural elements.

Much of the building had a sense of normalcy but with an unusual and over-the-top approach. It is the only Gaudi-designed domestic building where no changes have been made over time.

The exterior has intricate ironwork detail and a castle façade feel, which is fitting as it is the first Güell Palace of the Güell Park family fame. The other domicile inside Güell Park is still very much a private residence.

Ceiling gazing throughout this home is a must. I saw a lot of iron used inside, as well as other captivating structural and detail design. And the roof! The roof and terrace level did not disappoint with color, texture, line and form. It was like an entire textbook of design elements and how to use them. 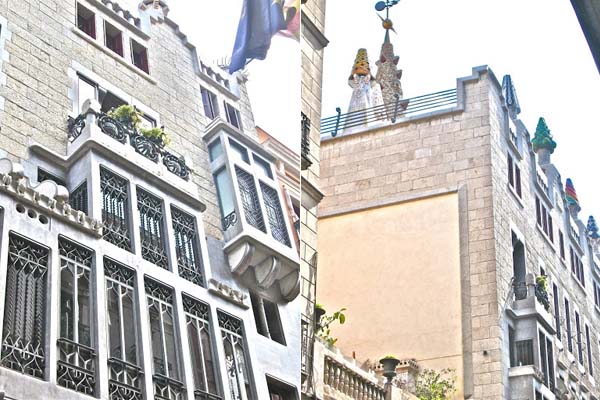 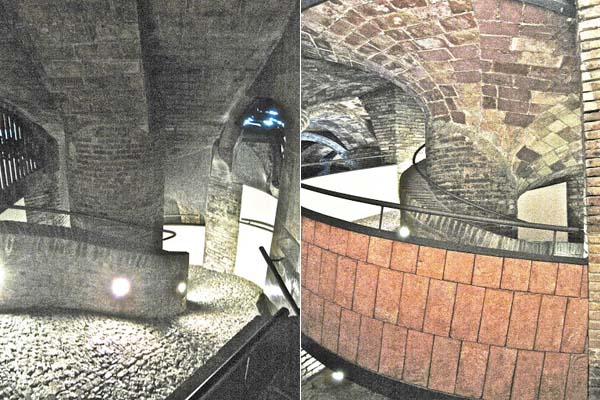 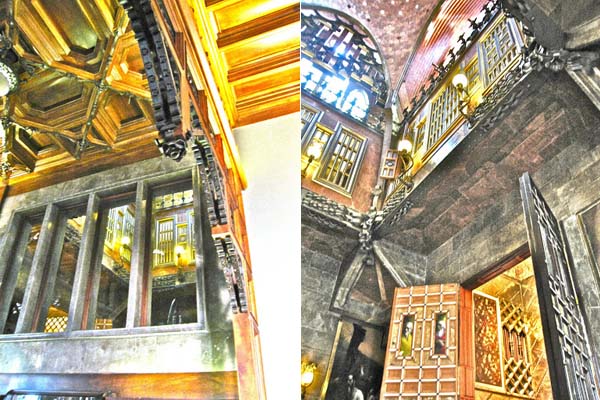 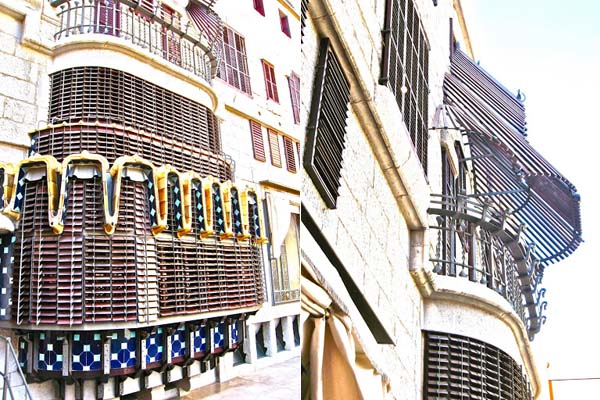 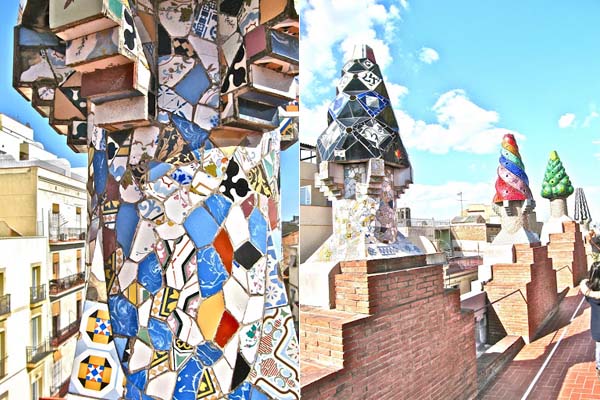 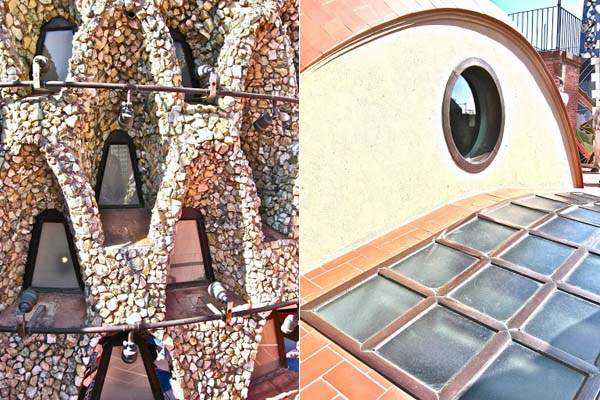 All these buildings are wonderful to experience inside and out, ‘up top’ and all the way down. However, some of Barcelona’s buildings were worthy of a serious neck ache.