Places 15 years ago No Comments

“What a delightful place Bath is,” exclaimed Mrs. Allen in Jane Austen’s Northanger Abbey. With fall now upon us, it seems the perfect occasion to refresh with a spot of bygone literary charm.

We’re off to “do the season” in this historic English city. So look out your bonnets, pull on your breeches, and let’s take a step back in time…

“He is going for his health to Bath”
—Lady Susan

What better way to start than with a little relaxation at the Roman Baths. This spa was popular in ancient times, with a building to house the pools created in the second century AD, and a 40-foot-high barrel-vaulted roof placed above. Because the natural phenomenon of water rising from the ground at 46 degrees Celsius was believed to be the work of the gods, a temple was also built alongside. At some point over the centuries, the roof collapsed, and the baths were no longer used. Rediscovered at the end of the nineteenth century, the complex was renovated and a terrace added. It was reopened in 1897, with the spa patronage a popular Victorian pastime.

Although no longer in use today, the location is a World Heritage Site and can be toured at your leisure. In addition to the lead-lined Great Bath, you can also see a suite of smaller baths and heated rooms, as well as view the Roman system of plumbing and drainage, which illustrates just how innovative this ancient culture was. 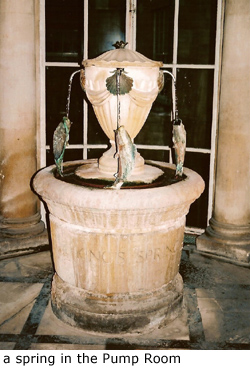 Before we move on, let us revive with a taste of mineral-rich water from a spring in the Pump Room. This gracious Neoclassical salon is worth a peek in its own right, with a restaurant open for lunch and tea.

Now we’re refreshed, let us take in this elegant town…

“The season was full, the room crowded”
—Northanger Abbey

No social visit to Bath would be complete without doing a turn at the Assembly Rooms. The name comes from a form of eighteenth century entertainment known as an assembly. Here people would meet up to socialize — play cards, enjoy music, or dance (balls were held twice a week). Today this space is used to house the Museum of Costume, though this being one of the best examples of Georgian architecture in the city (of which there are many), it is worth visiting for its structural design and interiors alone.

Now we’ve been seen here, let us find another amusement…

Oh no, nothing untoward for us genteel folk! This is merely a proposal to partake in a delightful promenade. The city of Bath holds free walking tours throughout the year, which provide a wonderful introduction to this enchanting place. Historic buildings of interest include the imposing 500-year-old abbey, the last Tudor church in England built before the Reformation. Robert Adam enthusiasts should make sure they see the Pulteney Bridge, an elegant construction with beautiful views of the English countryside, overlooking a dramatic weir. This is said to be one of only four bridges in the world with rows of shops on either side.

Alternatively, there is a Jane Austen tour (organized by the Jane Austen Centre), which takes in the homes where she lived and the settings of two of her famous novels. Bath is still very much as it was in Jane Austen’s era, making it easy for us to imagine we are back there now.

Someone please pass Ms. McDonald [PLiNTH & CHiNTZ’s very own] the smelling salts! There can be a tendency to over-exert oneself with all these splendid attractions in one place. Let us rest awhile, before continuing our tour — there is still plenty to see.

Designated as one of only three World Heritage Cities, Bath offers many not-to-be-missed sights, including the Royal Crescent. This beautiful example of Palladian architecture was designed by John Wood the Younger as gentrified lodging houses and was completed in 1767. No. 1 Royal Crescent is now headquarters to the Bath Preservation Trust, which has renovated it using solely eighteenth century materials and has opened it to public viewing.

Another Wood creation is the Circus (1754). Here, curved terraces form a circular grouping. Apparently inspired by Stonehenge and symbolism in general, there are 528 different carved symbols on the house fronts, taken from a fortune telling book of the seventeenth century. This collective piece of architecture was conceived to represent the sun, to the Royal Crescent’s moon.

For design buffs, the Building of Bath Museum (housed in a Gothic chapel) is another must-see. Here is detailed the history of this wonderful architectural gem, including its metamorphosis from provincial spa town to “valley of pleasure” for fashionable London society. Hands-on exhibits detail how a Georgian house was made, utilizing the local ashlar stone and ornamental plasterwork, with plans and tools provided as illustration. Of particular interest to the interior designer is the detailing of elements such as furniture, wallpaper, and upholstery of the era.

“Tea passed pleasantly, and nobody seemed in a hurry to move”
—Emma

No visit to this refined part of the country would be complete without indulging in English afternoon tea. A strong recommendation is Sally Lunn’s, a quaint tearoom housed in “the oldest house in Bath.” Here you can partake in a wonderfully generous Sally Lunn bun, a popular Georgian bread treat served with either sweet or savory toppings. Afterwards you can satisfy your archaeological interests in the little museum in the cellar, where you can view the house’s Roman and Medieval foundations, as well as see a Georgian kitchen laid out as it would have been back then.

Ok, maybe we’ll give the library a miss (this is not a working vacation!). I’m sure even a true lady or an upstanding gentleman would be ready for a tipple of something a little stronger by now. As with any English town, there are ample places to find a drink, and restaurants in which to eat. Just see what takes your fancy.

“Walk home! — you are prettily shod for walking home, I dare say”
—Emma

Fear not! You will not have to make the journey homeward on foot. If you did not bring your own carriage, I am pleased to disclose that Bath is well appointed, with a train station close to the center of town. From here, there is easy access to London, Cardiff, and other metropolitan areas. In addition, Bristol airport is nearby for the international travelers amongst us. And now I must bid you all farewell!

* These photographs are from the website Freefoto.com. Other photographs by Fiona Worboys.