Products 16 years ago No Comments

“Sorry for the delay, I am swamped. This month has been the busiest all year. We have reached our all time yearly record for sales this month.”
– an email message to PLiNTH & CHiNTZ’s founder, Laura McDonald, from Fulbright & Company’s owner, Jeff Fulbright, on 11/16/04

That quote pretty much says it all. This Little Custom Furniture Company That Could is definitely one of the big players now, and it’s all due to hard work, attention to detail, great talent and the shining personality of its founder (and – we’re happy to say – our friend) Jeff Fulbright. To know Fulbright & Company, you must know Jeff as well. Allow us to introduce you to both. You can’t help but like them.

ABOUT FULBRIGHT, The Company

Fulbright & Company specializes in designing and manufacturing fine quality office furnishings, focusing on the most high profile areas of the office environment such as reception areas and boardrooms. Some of their well-recognized clients include: General Electric, Fed-Ex, Exxon/Mobil, Enron, Nortel, MCI, Continental Airlines, the Country Music Hall of Fame, The King Ranch and NASCAR Champion Jeff Gordon.

Fulbright & Company stays on the cutting edge of technological developments within the furniture industry. With many products ranging from under mounts to pop-ups that blend in with the table top, they can offer designers and clients an extensive range of power, voice and data products for most any application. Their research and integration of these innovations sets them apart from other manufacturers.

From a 30’ diameter boardroom table to a 30” drum table, Fulbright & Company can – and will – accommodate. They welcome designers’ input on aesthetics, materials and finishes. Due to years of experience, they will help designers choose wisely, making them shine in front of their clients.

Approximately 85% of Fulbright & Company’s business comes from satisfied repeat customers. They have an exceptional record for quality products, great customer service and on-time delivery. Their goal is to make life easy for their end-users and the designers they work with, so it’s obvious why they have a very loyal client base.

ABOUT FULBRIGHT, The Individual

Jeff Fulbright is the man behind the curtain, and he’s worked hard to get there.

While he was growing up, Jeff’s family owned a general contracting company that primarily did commercial lease space build-outs. They had their own wood shop, which interested Jeff immensely. During summers and part-time during the school year, Jeff worked in the family business. He then went on to attend school at Sam Houston State but finished at the University of St. Thomas, majoring in Finance. Admittedly, he was an average B student and originally planned to be a stockbroker. 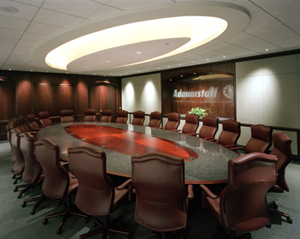 When his older brother took over the family business, he decided only to pursue the architectural millwork. After college, Jeff worked with his big bro, learning every aspect of the business until he ran most of it. By this point, Jeff had decided that being stuck behind the desk trading stocks was definitely not the life for him. He needed something more tangible and hands-on.

After a number of years, Jeff ventured out to take a position as estimator for a large millwork firm and was very successful. After about two years in that position, he was offered a job by Nevins (a furniture manufacturer) and eventually became president of that company after being there only two years. After 3-1/2 years, he resigned from Nevins to open his own business.

In July 1995 the dream of having a business of his own was realized. Kim, Jeff’s wife, encouraged him to start the business and was a major reason he did. She felt that Jeff had done a good job running businesses for other people, so why not do it for himself” 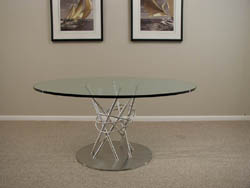 So what’s Jeff’s secret to success” He has always been a tireless worker. When he was employed by others, Jeff was regularly the first one to the office and the last to leave. In fact, he once went three years without missing a day of work. When he started his own business, Jeff worked 70-hour weeks. He did it all: fabrication, catalogs, accounting, customer service, drawings, and installations. Jeff started with $5000 and a dream, and since 1995 his company has sold over $10 million in product.

“Hard work and perseverance really does pay off in the end. I run my business as I live my life: be honest, treat others as you would like to be treated and stand up for what you feel is right. We have nurtured many long lasting relationships by means of this philosophy. I think design students need to take the time to listen to those who have already traveled the road they are about to travel and learn from their experiences. One thing I did as I started my career was to listen intensely and absorb all I could.” How can you not love this man”

Fulbright & Company is currently located in a facility Jeff built in Tomball, Texas (appx. 30 miles NW of downtown Houston) in 1998, and he welcomes any design students to tour. Excitedly, they are planning on building a larger facility in 2005 and adding an Architectural Millwork division. Since they have executed some elaborate millwork projects in the last few years, Jeff feels that this is a natural progression to his transcendent career. We whole-heartedly agree, and we can’t wait to see what Jeff does next. Keep on truckin’. 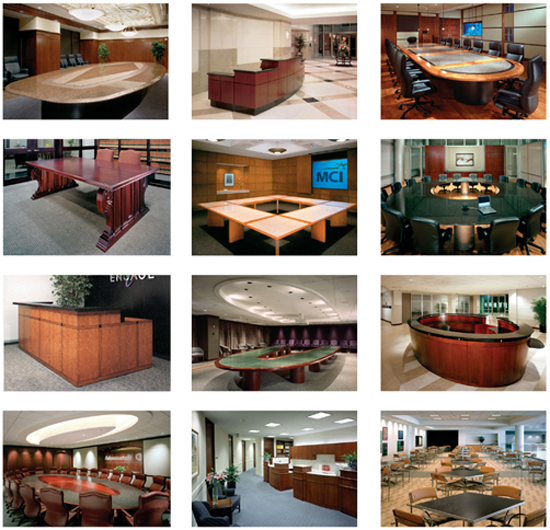 Jeff’s definitely entitled to a Family Brag Blurb, so here it is:

“I have been married for 20 years to Kim, and I have a son Chase (18) and a daughter Katherine (8). Chase is attending UT in Tyler and plays on their basketball team. He is doing great in school with an A average. His high school basketball team went to the 5A Texas State Championship and was eliminated by the eventual state champion in the semi-finals in Austin at UT last year. Katherine is only one of six kids in the third grade to be in the gifted and talented curriculum. She would like to be a veterinarian. I have two Yorkshire Terriers Max & Chelsea, and they think they are people.”

Many thanks to Jeff Fulbright and his staff, all of whom contributed to this feature in some way or another. We’ve worked with you in the past, and we hope to work with you in the future.

Are you a manufacturer and want to expose yourself… uh, we mean expose your brand or new product… to the masses” Shoot us an email at contact@plinthandchintz.com and put HOT PROPERTY in the subject line. A little exposure goes a long way. It’s getting’ hot in here…
Categories Products