Reality 10 years ago No Comments

Forget McMansions – they’re so last century. The smart money of the future is on smaller, more eco-savvy homes with fewer rooms, less formality, and more space for both private pursuits and family get-togethers, including aging parents and grown children returning to the nest. In the American home of 2020, family rooms and kitchens will be bigger. Less attention will be paid to formal living rooms. And dining rooms – instead of disappearing completely as so often predicted – will morph into multi-purpose spaces, incorporating home offices, study areas for the kids, and entertainment centers. That’s the preview of tomorrow’s American home, a survey just released by the International Furnishings and Design Association [IFDA], the 64-year-old organization whose members represent all aspects of the furnishings and design industry, including interior designers, manufacturers, retailers, publicists, and the press.

Their report, called “20/20: IFDA’s Vision for the Future,” is drawn from a survey of the association’s nearly 2000 members across the US and abroad (including Japan). Planned as an update to an earlier survey taken at the beginning of the Millennium, the current report both confirms and disputes those earlier findings.

Susan Hirsh, former IFDA National President who directed the Crystal Ball study, agrees: “American home life changed dramatically soon after we conducted our first survey in 2000. We were hit with a decade of circumstances we couldn’t have foreseen.”

• Americans will be living in smaller spaces and with fewer rooms by the year 2020, say more than 76 percent of IFDA members. Ten years ago, only 49 percent foresaw less living space in our future.

• Formal living rooms are going extinct, according to an increasing majority of the design professionals (64+ percent, up from 51 percent in 2000).

• Kiss your dining room goodbye, too: nearly three-quarters of the respondents (71 percent) doubt that there will even be a separate dining room in most homes by 2020. The space will be put to multiple other uses instead because….

• Separate rooms are disappearing; they are blending into spaces that serve many different purposes, believe 91.5 percent of the design experts – which is exactly what they foresaw back in 2000.

• Furniture also goes multi-purpose, say the IFDA forecasters (65.7 percent). They see modular, moveable, and smaller-scaled furniture overtaking built-ins and big pieces. There will be more interest in ergonomic designs – designed to fit the human body — and almost none in furniture designed to be disposable.

• Eat-in kitchens are voted most likely to succeed in 2020. More than half IFDA’s members said it is “likely or very likely” that eat-in kitchens would replace dining rooms, and nearly 65 percent believe future kitchens will grow larger, thanks to Americans’ escalating interest in home cooking.

• Master bedroom suites won’t be bigger, just busier. Although 52.2 percent of the surveyed members think the master suite will stay about the same size as now, they see it sharing space with the home office, media center, and exercise room.

• Everyone’s working at home. A home office is a given, say more than three-quarters of the respondents, but here’s the news: nearly 40 percent (37.3) of the forecasters see more than one home office under every roof.

• High-Tech is here to stay. A whopping 97 percent of the IFDA respondents believe that by 2020 more home equipment and furnishings will be activated, not by touch, but by other means, such as voice and sensor. Top candidates for remote control are lighting, entertainment gear and environmental controls (heating/cooling), and window coverings – 75.8 percent of the IFDA members believe that window treatments like shades, blinds and draperies will be motorized by 2020. Growth in other energy-saving devices drew 83.3 percent of the forecast vote.

• Spa baths draw hot interest. Although the trend towards larger bath space has slowed down, 83% of the design industry pros feel that luxurious products such as spa showers, high-tech fixtures/TVs are on the rise.

• Outdoor living is still in for 2020, but low-maintenance is a must. The 2010 survey showed 69 percent expecting outdoor living spaces to expand by 2020. About half the number stills think so (36.2 percent). It’s thumbs-down on swimming pools and hot tubs; thumbs-up on more low-maintenance landscaping and “functional” gardens (herb/vegetable) — 44.9 percent and 48.5 percent, respectively. That’s because about one-fourth of the IFDA members believe we’ll be spending more time gardening (26.9 percent) and entertaining outdoors (25.8 percent). 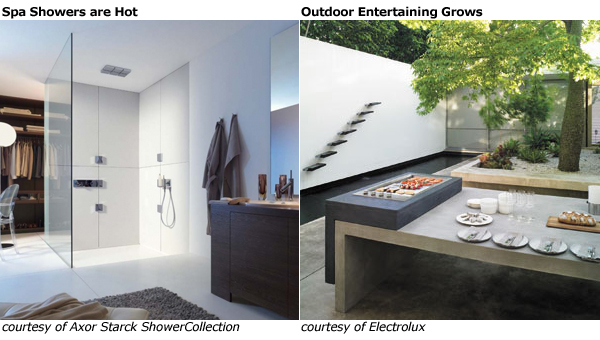 Many of IFDA’s findings are confirmed by a recent survey by the National Association of Home Builders [NAHB] of its own members. “The average size of new homes completed decreased from 2,438 sq. ft. in 2007 to 2.377 sq. ft. in 2010,” reports Stephen Melman, NAHB Director, Economic Services. “The builders also responded that by 2015, they expect the floor area of new homes to be an average of 2.152 sq. ft.” Melman traces the shrinking American home to the economy, to concern over energy costs, and the fact that baby boom buyers no longer need a large number of bedrooms. “They’re seeking a smaller footprint, but with a higher level of amenities,” Melman explains.

As the only furnishings and design organization with a membership that touches all parts of the home fashions industry, IFDA is ideally positioned to monitor the trends. Monthly design events and seminar presentations keep members up-to-date and connected to industry changes and developments. The Crystal Ball Survey is a chance to pull in all together and get a broad look at the years to come. As Susan Hirsch sums it up, “The reverberations of this recession will continue to impact the decisions and home purchases people make for years to come. I can hardly wait to see what IFDAers have to say when we conduct the next survey in 2020.”

Founded in New York City, IFDA has 16 chapters worldwide. Providing a professional forum for communication and interaction among its high-profile members, the IFDA promotes career advancement and educational opportunities. Now celebrating its 64th year, the association is structured to increase public awareness of the furnishings and design industry through specialized programming and service to the community.

For more information and details on specific areas covered by 20/20: IFDA’s Vision for the Future survey, contact Susan Hirsh: susan.hirsh@benjaminmoore.com.