Reality 16 years ago No Comments

Part of the business of design is giving something back. Whether it’s benefiting the profession, the unfortunate, the less educated, or the community, it’s a win-win situation. The recipient gets the benefit of the volunteer’s craft, and the benefactor finds satisfaction in helping others while having his talents recognized. (There’s nothing wrong with a wanting a pat on the back.) When the stars align, creative types get to volunteer their valuable time to collaborate with their peers, flexing their artistic muscles to pack a one-two punch. One such knockout project is the Paramount Theatre in Austin, Texas. How did eight distinct design firms work together to refurbish part of the historic theatre with $0″ Quick thinking, generous vendors, a cooperative spirit and a whole lot more.

This very constructive collaboration was brought to the attention of PLiNTH & CHiNTZ through our friend Paige Leigh Neagle. Together with her business partner, Harmony Edwards-Canfield, they own Vive! Lifestyle Design, LLC. The two of them worked with a disparate team to make something out of nothing. It is a fascinating case study of how designers, vendors, and contractors can all pull together to make some amazing happen with sheer will and generosity.

We asked Paige and Harmony to provide our readers with a backstage pass on the all-volunteer renovation. Let it serve as a prime example of how your design talents can contribute to the greater good. 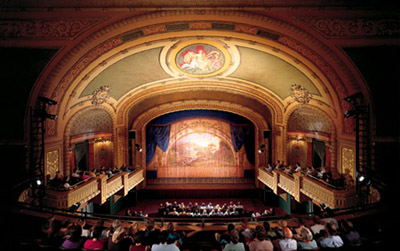 Act One: History of the Paramount

The Paramount Theatre began operations in 1915 and was designed by John Eberson of Chicago. During his career, Eberson built approximately 1,200 theatres, and he was one of the most respected theatre architects in the United States. The Paramount is one of less than 25 of Eberson’s theatres that are still in existence today.

Eberson was the innovator of the atmospheric theatre: a type of design where the theater ceiling is painted to look like the sky while the interiors are reminiscent of an elaborate outdoor garden. The front of house was restored to original glory in the 1980’s, but the backstage area was not included in the renovation at that time and was in terrible, deteriorating shape. 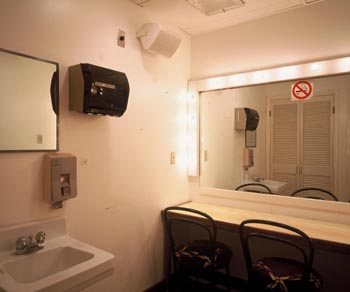 Act Two: The Stage Is Set

All designers were given a budget of $0 to replace everything: flooring, ceilings, lighting, wallcovering, plumbing fixtures and any other finishes. The designers were also given creative license to design what they thought was appropriate for each room. Each of them was asked to provide to team leader Paulson a list of the top three rooms we wanted to complete. Once the rooms were divided up – one to each designer – they created a concept and presented it to the Paramount Board. Notable were the Texas-themed Dressing Room 1 and the two Art Deco inspired Dressing Rooms 2 & 3.

Then began the hunt for donations of all products. All construction services and product had to be donated, so the sky was the limit! If they could get it donated, they could use it (including beaded glass wallcovering at $100 a square foot). After approximately one month of design development and procurement of product, they began construction on the backstage. That only left one month to complete the entire project!

Vendors were amazing in their generosity and willingness to work on such a short lead-time. Some performed small miracles by turning around custom flooring in as little as one week. This project reminded Paige how valuable manufacturer’s representatives can be: “Developing relationships with sales reps is very important, not just for this type of project but because they are a wealth of knowledge and a great resource from which to learn.” When one designer had her vinyl wallcovering donation fall through at the last minute, her local Zolatone rep pulled through and donated a brand new type of metal paint that ended up having its first Austin installation at the Paramount Theatre.

The atmosphere during construction can only be described as hectic chaos with eight different sets of general contractors and their subs running around, all working on top of each other – sometimes in as small a space as 65 square feet. The close proximity led to a genuine feeling of purpose as each designer found ways to help each other reach the goal of opening by July 29th. 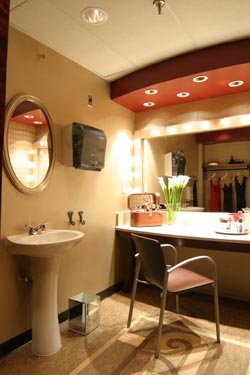 After long workdays and even longer weekends of tough work, each room was to be unveiled the evening of July 29th: Opening Night. Professional photos were taken that morning – a donation obtained by the Paramount Board – and some of the subs and designers were literally hanging the last piece of wallcovering (and even a sink) when the photographer walked in the room.

During the Gala, before and after shots were shown of each room. Harmony reports that “it was almost like looking at photos of dank prison cells transformed into a 5-star hotel.” The designers dusted the paint off their sleeves and answered question after question about each room. As the public toured the sparkling new space, they could view the total donated project cost, as well as the names of each of the vendors and persons who made the work possible. Average costs for each room were well over $300 a square foot.

The most asked question” How did you do this with NO MONEY” The answer to that question is teamwork, generosity and a desire to better our community. With these things we can create beautiful spaces with maximum impact!

To learn even more about the project and the theatre, click on the following links:

Are you a designer or an industry guru who has a backstory to share” Truth is usually stranger than fiction, and our readers want to hear about it. The goal is not to scare away the idealists, but rather to prepare them for whatever comes their way. Email us at contact@plinthandchintz.com and put REAL WORLD in the subject line. Share your story. Inquiring minds want to know.