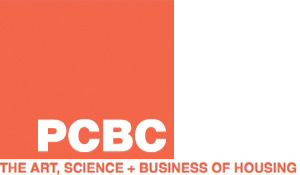 MESSAGE FROM THE ORGANIZERS: PCBC 2020, scheduled for June 10-11, 2020, in San Francisco, has been cancelled due to the COVID-19 crisis. Thank you for your patience and understanding during these last few weeks as we worked through the difficult decision to cancel this year’s show. The outpouring of support and encouragement that we have received from exhibitors and attendees has been heartwarming and we want you to know how much we appreciate being part of this great homebuilding community.

PCBC is a gathering of America’s most prominent residential builders, developers, architects, building scientists, lenders, investors, marketers and product manufacturers. Although PCBC made its name as a homebuilding event, it now draws major builders of a wide range of housing forms from single-family, multifamily, mixed-use, seniors, and resort development.

At PCBC join 10,000+ colleagues for two valuable days of the latest industry trends and insights at the industry’s premier conference and trade show.

Dedicated to advancing the art, science and business of housing, PCBC is the largest homebuilding tradeshow representing the west coast region.

Launched in 1959 as a small educational conference at the Sheraton Palace Hotel in San Francisco, PCBC is now an annual two-day conference, product display and business exchange and is open to anyone professionally involved in the building industry, including builders, developers, architects, remodelers, designers, contractors, dealers/distributors and suppliers/manufacturers.

In the past, PCBC was an acronym for “Pacific Coast Builders Conference”. Over time the name became an inaccurate reflection of the audience, as the show now draws attendees from all over the United States, Canada, Mexico and more than 25 other countries. Today the show is known simply as PCBC.

PCBC alternates each year between San Francisco and San Diego and has been endorsed as the official show of Leading Builders of America (LBA), whose membership includes 20 of the largest publicly and privately held homebuilders in the nation