Great Designers Never Stop Learning – Before, During & After School

Education 12 years ago No Comments

Over a two-year period, we at Texas State University [TSU] have learned a lot about what it means to design in the real world. Every year student organizations from TSU hold an event called Bobcat Build, going

out to the San Marcos community to provide services to residents who may otherwise not be able to maintain their properties. Traditionally, activities have included ramp building, trash removal, yard work, fence repair and other tasks related to general upkeep. For the last two years, however, the TSU ASID Student Chapter has added some interior design projects to the mix. We gained valuable experience and contributed at the same time. A win-win situation, to be sure!

Each project consisted of a client meeting and a two-week design charette, a very limited budget and implementation of the design in a period of less than eight hours on a Saturday. It was the real world in overdrive!

Both years, there were surprises along the way, and we made a concerted effort to evaluate what worked and what didn’t work after completing our first project. 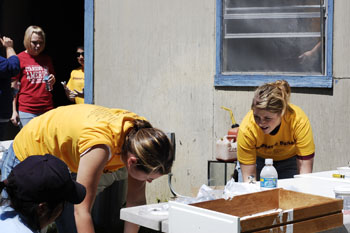 We then implemented improvements to our process in year two. There were still hiccups, but it was more successful the second time around.

Upon reflection, I think it is safe to say that we looked at our experiences from a project management perspective, intuitively recognizing that successful design is dependent on skillful execution of the basics, having a clear scope of work, effectively managing resources and having a realistic schedule.

The first year we were partnered with a local human services agency that paired us with families who were open to the idea of having a home “makeover.” Both had disabled family members and were single-parent households. We were truly excited to work with them both.

With a budget of $550, we set out to improve the homes of these families, one of which had little in the way of décor and the other who was suffering from the 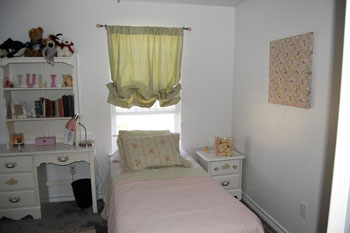 perils of clutter and disrepair. After raising an additional $1,000 in donations, scouring the discount stores and negotiating reduced prices on merchandise, we were able to give almost all of the rooms a complete facelift. In the end, we were very proud and the clients were very happy, but there were painful lessons along the way.

Lesson 1 | Manage expectations diplomatically and with attention to the client’s needs. We had one family ask us if there would be a “Move that bus!” moment. Scratching your head is not a good response.

Lesson 2 | Learn the budget, love the budget, live the budget. It’s one thing to make a spreadsheet of specifications of all the dream products you want to use for your project in class, but it is a completely different thing to transform multiple spaces on roughly $150 a room.

Lesson 3 | Plan, plan, plan! In theory, time management and understanding dependencies is a huge part of the design process, but you can’t really appreciate it 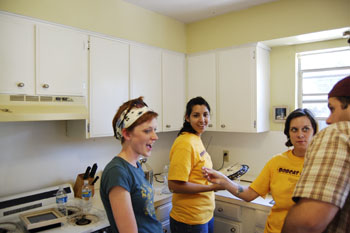 until you’ve had two beds show up that you have to set out on the lawn indefinitely.

We had a small team of lead student designers who were responsible for doing the fundraising, design, as-built drawings, specification and management of the installation. They knew their responsibilities and went above and beyond the call of duty, spending two weeks, day and night, coordinating the effort. We were red-eyed, a little grouchy and way behind in our schoolwork, but the teamwork and commitment really paid off.

Fast-forward to year two, with the past year’s team leaders saying…

As it is in life, you should always expect the unexpected, and, even with the best intentions, things don’t always turn out as you planned. Year two was good, but it wasn’t perfect or flawless. 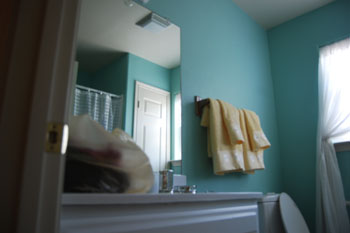 However, we made big strides in the areas we knew we needed to work on, and we dealt with challenges with relative grace. We went with what worked from the past year, implemented our lessons learned and stayed positive.

We chose a project that would require only one team and one location. We partnered with Sunrise Village, a senior living community, to refresh their clubhouse and to address materials and finishes that were not the best choices for the center. It is a amazing what a group of motivated volunteers, great leaders and the thoughtful design of TSU interior design students can produce.

We also started earlier, though we lost some time due to changes in the internal process of the university program. We received an amazing donation from the Austin Design Community of the Texas Chapter of ASID, which, in the climate of this economy and people’s reluctance to part with their cash, was a tremendous help. We aggressively pursued discounts and donations, to which Sherwin-Williams responded generously.

We used our technical knowledge of codes and materials estimating to ensure we specified the right products. It wasn’t 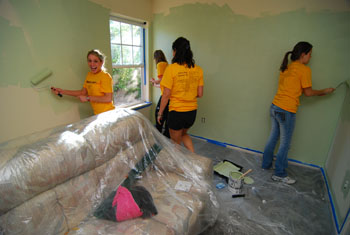 perfect, but we had the opportunity to live the real world scenarios of things being different in the field than they are on paper…and solving the problems effectively with little negative impact.

The residents of Sunrise Village were very happy with the results, and we were able to complete the project under budget, on time and with complete execution of the design!

The BIG lesson: You learn. You put what you know into practice, and you learn some more! The whole experience gave us all insight into our future because we lived – for a few weeks – the reality of being a designer and all of the problems and excitement that comes with it: dealing with the unexpected, the oops, the personalities and the fun. You help people make their lives better. And you never stop learning.