Miscellanea 14 years ago No Comments

As a well-seasoned mother of two daughters, I consider myself a realist. Going through diaper rash, junior high dances, and the college application process – not once, but twice – tends to toughen you up.

I know there are no free lunches, you generally get what you pay for, and you can’t always get what you want (oh, and you can’t go home again). But every now and then I surprise myself with just how far into cluelessness I can drift. My recent foray into the deep, REM-sleep regions of the American Nightmare (oops!) Dream of home-ownership is the proof in the pudding — or, shall we say, the splinter in the 2 x 4″

Just think, I would get to watch my very own home go up, brick by brick, and then get to decorate and furnish it, too! Hot biscuits! After the nasty part about qualifying for hundreds of thousands of dollars (talk about picky), I envisioned myself in this Southern Living-like showroom, through which I would be casually escorted to select the fabulous appurtenances and accoutrements that would turn my new home into a Southern Living-like showroom, too. Right. And it never rains in southern California.

My appointment at the homebuilder’s “design center” was after work one Texas-killer-hot Monday evening. Unfortunately, I’m not in much of a designin’ mood on Monday evenings. I’m generally recuperating from an exhausting weekend, I’ve worked all day, and I just want to get reacquainted with my sofa. And it’s hot.

So, clue number one that this experience was not going to be quite the adrenaline-pumped shopping spree I thought occurred when the way-too-cheerful voice on the other end of the phone said, “Mondays are all we have.” I’m thinking, “But I’m the one about to be on the hook for a gazillion dollars for half-a-gazillion years, can’t I pick my own day” Dangit, I am the master of my home-building fate and captain of my home-building soul!” So, when I showed up on Monday…

When I showed up that Monday, along with the eleven other potential homeowners, my first thought was, “It’s hot in here!” My level of confused disappointment escalated (possibly heightened by the group B.O.) when I spotted a seemingly haphazardly placed kitchen sink in the “orientation conference room.” That was clue number two that this was not going to be the glamorous experienced that I so desired. I don’t know about you, but my personal policy is never to make major feng shui decisions in large, malodorous groups while crammed in an undersized room outfitted with a misplaced sink. It’s just one of my rules.

After listening to some Charlie Brown-parent-like mumbo-jumbo about window density, HVAC life-cycle costs, and sod quality, we were handed a printout of items thick enough to be the 1973 Yellow Pages (before everybody was unlisted) and written in some kind of code that had to have been by Stephen Hawking.

But surely they would do something to try and make choosing doors and carpet padding a semi-pleasant experience instead of the major downer it portended, right” Yeah. And it never rains in southern California. 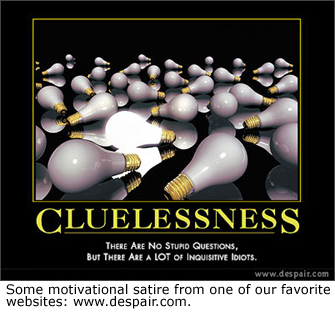 After listening a while longer to Charlie Brown’s parents and the inane, sometimes downright ludicrous questions of the other homebuyers (Will we have a mailbox” Do you spray for roaches” – I mean, really!), I learned that everything – and I do mean everything – is an “upgrade.” You’ve got your standard and you’ve got your upgrade — standard must have lost the bet.

I remember jokingly asking one representative, “Will I have doorknobs, or are they upgrades, too”” Actually, they are. Certain kinds of doorknobs, that is. The standard was this spatula-looking knife thingy jammed into a strategic crevice around the doorjamb. You had to pay extra to get the actual round, shiny orb that you turn. Okay, it wasn’t that bad, but seriously, if you happened to want something different like, say, brushed nickel — you had to apply for a second loan.

I don’t mean to sound like a broken record, but if you’ve subjected yourself to this traumatic process that was going to suck up the next 30 years’ worth of paychecks, you’d think you could expect some blinds on the windows, right” Nope. That’s an upgrade. A light fixture on the porch” Upgrade. Off-white paint on the walls” Upgrade. I’m not kidding. Most everything I thought was just regular ol’ standard stuff that comes with any newly constructed house was (all together now) an upgrade. I felt downgraded. And clueless.

I guess I’d been too busy raising my girls and being an apartment-dweller. I had no idea that there were so many ways to turn a simple bathroom into a showplace. Or a fireplace into a design thesis. Or a kitchen into a restaurant-quality critics’ choice. It’s all about the upgrades, baby!

Though I lost a little money, thank God I cancelled that contract. While it was a definite tip-off, the design center experience wasn’t what convinced me to cancel my homebuilding plans with this developer. I later found out this particular builder had an entire website devoted to it with “sucks” in the web address. Need I say more”

So I’m starting all over again with a brand new builder, and guess what” BRUSHED NICKEL DOORKNOBS ARE STANDARD THIS TIME.